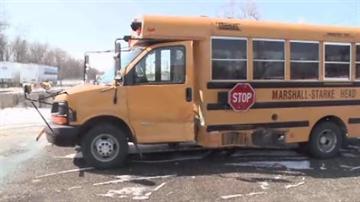 STARKE COUNTY, Ind. – A collision between a truck and a Head Start bus sent 14 children and two adults to the hospital Monday morning.

The accident happened at the corner of US35 and Lake Street in Knox around 8 a.m.

Officers say 63-year-old Larry Troike of Winamac was driving a flatbed truck when he ran a red light and hit a Head Start bus.

Troike was cited for disregarding the traffic signal. He told police he thought he had a green light.

Troike was also taken to the hospital for tests.

"He was transported to IU Starke to a chemical test and that is going to be pending because it has to be sent to a lab," said Clint Norem, Knox Police Chief.

Norem said that is normal procedure in a commercial traffic accident with injuries.

As for the children, they were all seen at IU Health Starke Hosital and some were treated for minor bumps and bruises in the Emergency Room, according to hospital officials.

Parents, like Tanya Keaton, had a moment every parent dreads Monday.

"I was at work and the school called and said that the bus had been in an accident,” said Keaton.

At the hospital, Keaton says the emergency room waiting area was in chaos with anxious parents.

"The parents had no idea, they weren't allowed to see their kids until they were done examining all of the kids,” said Keaton.

It was a scary time for staff at the Marshal Stark Development Center at St Thomas Preschool where the Head Start bus was headed.

"Scared me. I thought of the children right away, I was just hoping and praying that no one was hurt,” said Pat Singleton of the Marshal Stark Development Center.

At this time, it appears there were only minor injuries thanks in large part to safety regulations required by the federal government.

Each Head Start school bus is outfitted with seatbelts.

Both singleton and the police believe seatbelts played a big role in limiting the injuries.

"I know the driver and the monitor did get a little bit of a sore shoulder, but the children they all seem to be in pretty good shape,” said Singleton.

Keaton wanted a second opinion so she took her child to their family physician. Their doctor ordered a CT scan and x-rays.

All of the children and all of the adults have been discharged from the hospital, according to hospital officials.