Health Department: Get a shot or go home 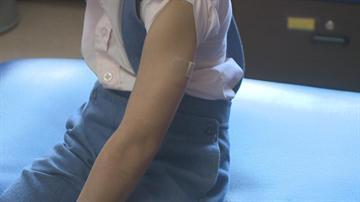 MIDDLEBURY, Ind. – The Department of Health has given some parents in Elkhart County and ultimatum, get your gets vaccinated or get them out of school for at least three weeks.

This special mandate comes after an outbreak of chickenpox in the Middlebury Community Schools. As of Thursday afternoon, there are thirteen reported cases of the disease. Those reports range from kindergarteners to high school students to even teachers in the district.

“It’s nightmare I think for a lot of parents who are in this boat,” Melissa Garner said at her home in Goshen.

Two of her three kids go to the Middlebury schools, her daughter; identical twins are in the 7th grade at North Ridge Middle School.  Kayla got the chickenpox when she was four, but her twin, Brenna never got the disease.

“There were a lot of tears,” Garner said when one of her two girls came home with a letter keeping her out of school.  “Now Brenna won’t be at school with her for three weeks and they’ve never had that before in their whole life.”

Garner said she and her husband decided a long time ago to not vaccinate their three children, she said it’s just not an option for her family. “We’ve seen hoe vaccinations can cause some issues that you wouldn’t necessarily have without them.”

At the beginning of every year Garner signs a waiver for her kids to attend public school without any vaccines, it includes a clause which states her children would not be allowed in school if there was any kind of disease outbreak.

“When I hear the word epidemic or outbreak, I’m thinking kids in the hundreds are coming down with chicken pox,” Garner said.

The Indiana Department of Health considers reports of five or higher to be an outbreak. In an attempt to control the chickenpox outbreak in Middlebury, the department stepped in and gave parents two options, vaccination or exclusion.

Garner said, “The state has overstepped a little bit in this case. We do have the rights as parents to choose whether to vaccinate or not to vaccinate.”

Any students who have not had the chickenpox or the vaccine must stay home from school for twenty-one days after the last case is reported.

“Yes, that’s what the health department has asked us to do, has told us to do.” Middlebury school nurse, Michelle Miller said.

The first case was reported on November 10th at the Middlebury Elementary School, since then its spread to thirteen other people in different grades and schools. Right now, the superintendent says kids without vaccines can come back to school on December 21st, but that’s only if there aren’t any more reports.

“I’m not sure why it is spreading, why we have so many cases,” Miller said.

There are about 45-hundred students at the Middlebury Schools, 550 were not vaccinated or did not have the second dose of the vaccine before the outbreak. Miller said in 2010 the state changed the requirements; students in public schools should get the chickenpox vaccines before kindergarten, then another shot before the 6th grade.

For religious or medical reasons, parents can choose not to vaccinate their kids, but now Garner says she feels like her choice has been taken away, “It is challenging when somebody says you have to do this, or these are the consequences.”

On Thursday each of the schools in the district held its own free vaccine clinic, Miller guessed about 350 students came in for the shot still that leaves about 200 out of school.

Even though it’s been a nightmare, Garner said she won’t back down, I would never want that right taken from me on the decision I make for my children.”

She said she’d rather home school her daughter than compromise her family’s values, “It is a little scary if they can come in and do this…What’s next?”

The school district has made it clear, this is not what they want, but the state has taken control. Students who are out of school will not be penalized for their absences but Garner said the kids will suffer, “I’m just not sure how you really do get caught up when you’ve missed three weeks of school.”