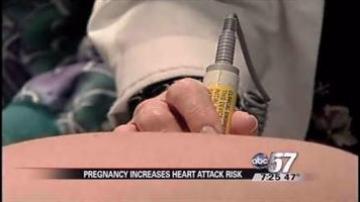 A startling find about heart attacks and pregnancy.

Doctors found heart attack rates go up in women who are pregnant.

The rate is four times higher in a pregnant woman than your average woman.

Doctors said that it's often more dangerous because inlike most heart attacks, pregnancy heart attacks typically involve the tearing of an artery instead of a blockage.