Heart-wrenching animation shows where victims were killed at Stoneman Douglas 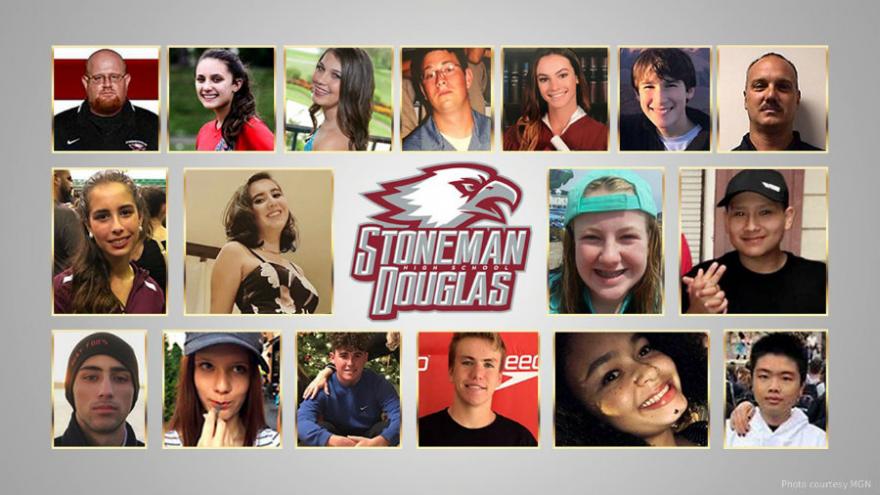 (CNN) -- Family members of those killed in the massacre at Marjory Stoneman Douglas High School got their first look Tuesday at how exactly the shooter moved through the school, mowing down students and teachers. [View a recording of the meeting]

A video animation detailing the killer's path through the school was played during a meeting of the Marjory Stoneman Douglas High School Public Safety Commission. It shows a floor plan of building 12 and uses a black dot to represent the shooter.

They turned to yellow when someone was wounded.

And to purple when someone was killed.

"It was tough. I knew which dot was my daughter," said Andrew Pollack, whose 18-year-old daughter Meadow Pollack died after she was shot multiple times while on the third floor. "So it was pretty brutal for me."

Shooter wanted to be a sniper

According to the animation, eleven people were killed on the first floor and six on the third during the rampage, which lasted less than seven minutes.

No one was killed on the second floor, the animation shows.

Commission chairman and Pinellas County Sheriff Bob Gualtieri said the shooter had a bipod on his military-style semiautomatic rifle, and tried to fire through a third floor window at fleeing students.

"There was no question that that man was in there to act as a sniper and he was going to kill as many kids as he possibly could," Gualtieri said.

The bullets didn't make it through the double pane glass, and the gunman tried to open the windows but couldn't. He gave up after about three minutes.

He left his rifle in a stairwell and walked out with the people trying to get away from the gunfire, the animation shows.

Some students hid, others fled

The sheriff said a fire alarm was going off but students on the second and third floors reacted differently.

People stayed in second floor classrooms, likely after they heard shots, he said. People on the third floor couldn't hear gunfire and moved into the hallway.

Pollack, one of three fathers of a victim on the commission, said schools should make it a policy that fire alarms don't automatically mean students should rush out of the classroom.

"That's something that can be done today to save lives if there is another active shooter scenario," Pollack said.

On February 14, the day of the shooting, there was one school resource deputy for 4,300 students, between the high school and nearby Westglades Middle School, Gualtieri said. The middle school deputy was at training and no one took his place, which is now the rule, he explained.

Gualtieri said they are digging into that policy and others. And while they have received reams of investigative documents, not everyone is cooperating.

The commission has statutory subpoena power, he said.

Some of the failures from the incident included the incompatible communication system between different agencies, the total failure of the BSO communications system and the role of the school resource officer.

Body cameras showed some law enforcement officers attempted to communicate over the radio four or five times without being successful because the radio systems stopped working, according to the briefing.

To get a sense of where school resource officer Scot Peterson was located at the time of the shooting, the commission members took a private onsite tour of the scene. Peterson never entered the school to engage the shooter. He was suspended after the shooting and resigned shortly afterward.

An attorney for the former resource officer said at the time that Peterson "is confident that his actions on that day were appropriate under the circumstances and that the video (together with the eye-witness testimony of those on the scene) will exonerate him of any sub-par performance."

Commission members were told they will be allowed to watch the school surveillance video of the shooting in a later private session.

Parent and commission member Max Schachter's voice cracked while asking the commissioners not to release the video of the shooting publicly.

The commission is made up of nearly two dozen statewide appointed members who are tasked with investigating the system failure during and prior to the shooting.

The commission's final report is due to the governor January 1.