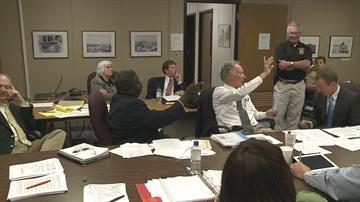 Youth violence has recently been on the rise and most of the committee meeting focused on efforts to curb the bloodshed.

When Interim Police Chief Chuck Hurley spoke to the committee Second District Councilman Henry Davis argued with him, claiming Hurley wasn’t coming up with any plans about how to fight the problem and had been asking council members to come up with ideas.

Davis actually walked out of the meeting.

“It sends a strong signal, a message, to the council person that means that that police chief probably should not be the police chief if he cannot do his job,” Davis explained.  “That goes for any other city employee, as well as myself.”

Davis claimed that Phelps was being disruptive at the meeting and being disrespectful to council members.