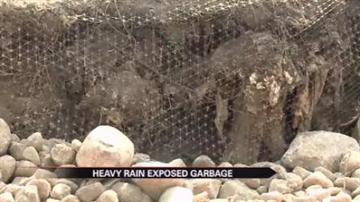 MICHIGAN CITY, Ind. -- Last week's heavy rain knocked loose the soil surrounding a decades old dump site along Trail Creek, near Karwick Nature Park. The trash was exposed and city workers had to work quickly to stop any trash from being dumped into the creek.

"We've known we've had a problem out here for a little while, but it really wasn't that alarming of a situation,” said Michael Kuss, the General Manager of Sanitary District of Michigan City.

That is until last week when torrential downpours caused rivers to swell.

"We saw that water level come up about 5.5 feet; and it came up 5.5 feet, maybe, in about a day,” said Brian Breidert, Indiana Department of Natural Resources.

The intensity and force of the moving water ripped at the banks of Trail Creek and exposed trash discarded long ago.

"We were like, 'Wow, we've got to do something right away.' Because it did not look good at all,” said Kuss.

By Friday, the situation was critical.

"If we didn't take quick action we were going to be risking the health of the citizens of the area,” said Kuss.

They brought in the heavy equipment, netting, and glacial stone to keep the trash out of the creek.

"As soon as we saw it, we got right out here and started working on it the very next day. You know, so far we've got $50,000 earmarked for just this emergency,” said Kuss.

Kuss is pleased with the turn around.

"I don't think there's too many people who thought we would get this much done in two days,” said Kuss.

Not only was Breidert surprised, he says they are doing a great job fixing the problem.

"The city's response has just been nothing but exceptional,” said Breidert.

This fix is just temporary.

"One of the options that we have for long term solution is to reroute Trail Creek,” said Kuss.

It could be rewarding if done correctly, or disastrous if done incorrectly.

Ultimately Michigan City officials will have the final say in what is done.

"We just want to do our best to protect our natural resources and our environment,” said Kuss.

The other option the city is exploring is to permanently cap the dump site with clay.