Help me! Fish peers out from inside a jellyfish in one-in-a-million shot 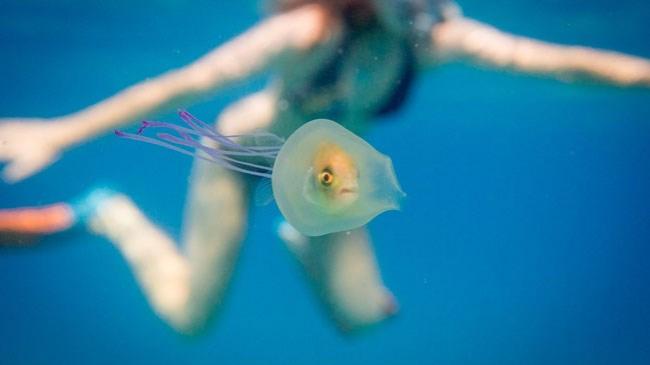 (CNN) -- An Australian ocean photographer has captured a one-in-a-million example of the cruelty of life in the deep -- a fish peering out into the ocean, helpless, from inside a jellyfish.

He told CNN he was snorkeling out to a reef with a friend and collaborator, videographer Franny Plumridge, to photograph turtles and was swimming in open water between the shore and a reef when he came across the unusual sight.

"There were no other fish in sight," he told CNN by phone. "I just stumbled upon it."

He says he followed it around for about 20-30 minutes, and, despite the difficulties of focusing on such a small subject, was able to take a few photos, which he published to his website and Instagram account.

"(The fish) seemed to be struggling a little bit, as it would swim around, it would try to swim in a straight line but the jellyfish would knock it off course, would send it in little circles or loops.

"It was a tough decision, I definitely thought about setting it free, but in the end decided to just let nature run its course."

Much of Byron Bay, where Samuel is based, is a designated marine park and is protected from fishing. As a result, Samuel says, marine life is thriving.

He says he's been in touch with marine biologists through the nature publication Australian Geographic, who "say they've never seen anything like it," he says.

"At the time knew I'd stumbled upon something pretty special."

The publication quoted Ian Tibbetts, a marine biologist at the Center for Marine Science at the University of Queensland, who suggests the fish could be a juvenile trevally, which are known to use jellyfish stingers as protection.

"It's difficult to tell whether disaster has just struck, or whether the fish is happy to be in there," he is quoted as saying.

"Although by the photographer's description of the fish swimming, my guess is that it is probably quite happy to be protected in there"