Helping the homeless in South Bend 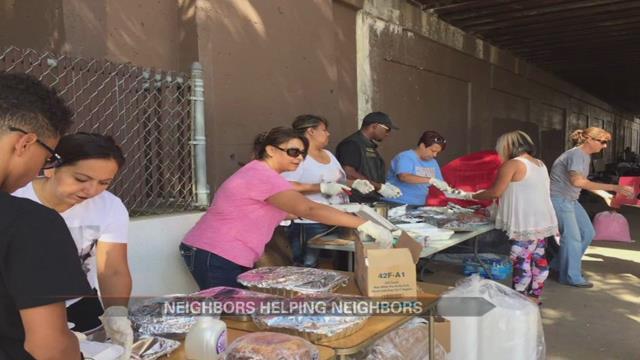 On Sunday people from all over Michiana came out to give food, water, and clothing to those who have to live on the streets of South Bend.

Those who are living under a bridge near South Lafayette Boulevard say they are grateful someone seems to care after often feeling ignored.

“When it rains we have to move because the water comes down the wall it’s really hard”, says Melissa Alveslebron.

Alveslebron is homeless and has been living under the bridge for two months. She says it is noisy and uncomfortable and rarely do people pay attention to her and about 20 of her neighbors.

“I’ve been there before and really anything something out of your control ultimately put you in the situation where you are homeless,” says John Winston Jr.

Winston also used to be homeless which has prompted him to help. On Sunday her brought food, clothing and, water to those living under the bridge.

This is the third Sunday Winston helps out and he funds everything himself, but now others are starting to join in on the charity.

“It’s sad to a point to see how many people actually just drive by and just kind of look over and keep going without, I couldn’t do it,” says Winston.

Winston’s kindness has not only helped those who live under the bridge get some food in their stomachs but it has also lifted their spirits.

“They brought themselves their companionship and camaraderie they brought a lot,” says Alveslebron.

Winston says he plans to help every Sunday. He will be at the overpass near South Lafayette Boulevard from 12 p.m. To 1:30 p.m.

If you would like to get involved stop by or get a hold of John Jdubbs Winston Jr on Facebook.