Henry Davis Jr. sparks outrage from GOP over a tweet 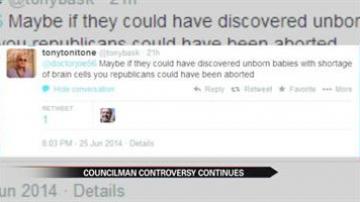 Retweet means Davis Jr. did not write the words himself he just shared them onto his Twitter timeline.

The tweet read, "Maybe if they could have discovered unborn babies with shortage of brain cells you republicans could have been aborted."

Davis Jr. said he didn't mean to offend anyone. He says since those weren't his own words, he doesn't understand why there is so much anger towards him.

“I am for freedom of speech and I think people should say what they want to say. But I think as a person who is an elected official, he should be more sensitive in regards to what they do post on social media,” said Fleming.

The tweet was sent two days after Davis Jr. learned he would not be punished for the controversial Facebook post that included a photo of a man engaging in bestiality.

When Davis Jr. went in front of the council, they took the approach that the Facebook situation should be a learning opportunity for Davis Jr. and that all city leaders should receive social media training.

The retweet has since been removed from Davis Jr.'s Twitter timeline.