Henry Davis Junior will not face any punishment for his post 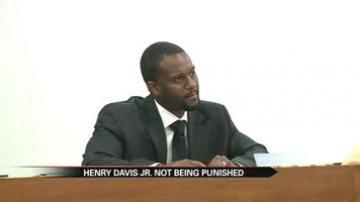 SOUTH BEND, Ind. -- The fate of council member Henry Davis Jr. was in the hands of the council Monday night.  He faced disciplinary action for posting a vulgar Facebook picture.  Monday, the board decided to dismiss all complaints, with Council President Oliver Davis using his authority to accept Davis Jr.'s motion to dismiss.

This all stems from a Facebook post made by Councilman Henry Davis Jr. It was an article about how military members can have sex with animals and it included a graphic photo of a man and a dog having sex.  The article was entirely false, but the picture still upset many people on social media.

After citizen complaints, apologies, and back and forth with fellow council members on how this should be handled, it seemed everyone just wanted a final decision.

And that's exactly what happened Monday night.  The Rules Committee recommended a public censure and other penalties.  But since it didn't receive a majority vote, the recommendations were dismissed.

That means the matter is dropped.  The council is now deciding how to learn from this, whether through an ethics committee or social media training.