Herd of deer crashes into plaza 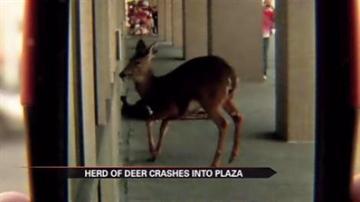 The chaos broke out Saturday afternoon in Harrison County near the Kentucky border.

Firefighters were called to spray down the sidewalk and sweep up broken glass.

Store owners and shoppers described the scene as crazy.

"We just heard a lot of really loud noises and we looked outside and there was like at least 10 deer just running up and down the strip," said Katie Hall, hair stylist.  "It was crazy!  They were running into all the windows."

"It's crazy. There was people screaming and all that," said Jerrad Simon, shopper.

The DNR says two of the deer died.

Officers believe they came from some nearby woods.