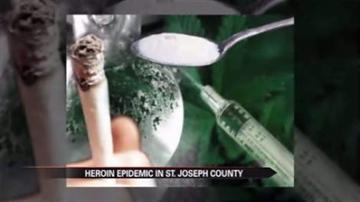 ST. JOSEPH COUNTY, Ind. --  People in La Porte have been battling the heroin epidemic for years and now that problem is trickling down to St. Joseph County.

“Crack cocaine used to be an epidemic in St. Joe County and now it has evolved to opium addiction and heroin,” said Healthy Community’s Initiative Director Beth Baker.

Baker says heroin is the new drug of choice in St. Joseph County.

“It has clearly been increasing when it comes to people intervening with law enforcement,” said Baker.

She says there are a few reasons why the drug is so popular.

First, many people are using it as a cheaper version of prescription pain killer addiction.

“Sometimes after that treatment subsides, they are physically dependent on the medication and then they turn to what they can get on the street, which is typically heroin,” said Baker.

Second, it is cheap.

“It is pretty inexpensive, when you look at it comparatively to crack or cocaine,” said Baker.

But where is it all coming from?

“We are getting pill drop boxes,” said Baker.

These drop boxes would be in places like the police department where people can drop off their unused prescription drugs, no questions asked.

But that is just the beginning. Baker says it is important for her team and law enforcement to get the heroin off the streets fast.

“It can kill you,” said Baker.

Baker also says one of the scary things about heroin is that it is unregulated, making it easier to overdose on.  Also people who are dependent on it will do almost anything to get it, including commit other crimes such as petty thefts.