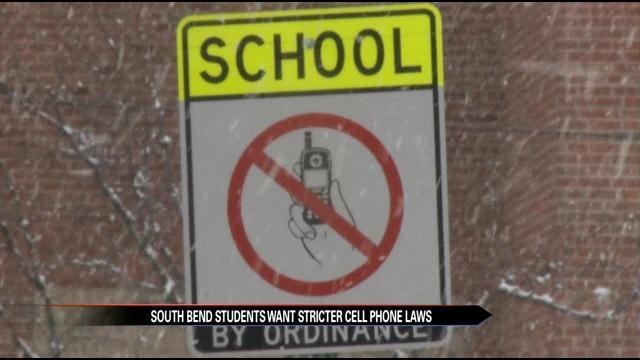 Many people cannot leave home without a cell phone.

They are basically an extension of the body these days, but as they become an issue when people get behind the wheel.

Currently, the City of South Bend bans drivers from even touching their phones in school zones.

The State of Indiana prohibits texting and driving completely.

A group of South Bend high school students feels these ordinances do not go far enough.

They presented their plan to the Common Council on Monday, and they want phones to be banned for any reason in the driver seat.

The current ordinance is very hard for police to enforce.

“We hear commercials and announcements all the time of people dying in car crashes,” said Hicks.

According to the Indiana Department of Transportation, 225 deaths were caused by texting and driving.

Hicks said it hits home with her.

“A girl at our school, her dad actually died from texting and driving; she said a car ran into the car her dad was in and she said his lungs collapsed,” said Hicks.

Hicks and others are taking action, to make sure the signs that are only posted in school zones are posted on every street corner in South Bend.

She is using just 140 characters to get one simple, life-saving message out, while working alongside Common Councilman Henry Davis Jr.

“You have cities like Chicago that obviously don't allow you to use your phone at all unless you have like a bluetooth and maybe the City of South Bend can investigate and move into so that it is enforceable. This is step one, obviously we're going to make sure we carry this out all the way to a completion,” said Davis.
Share this article: