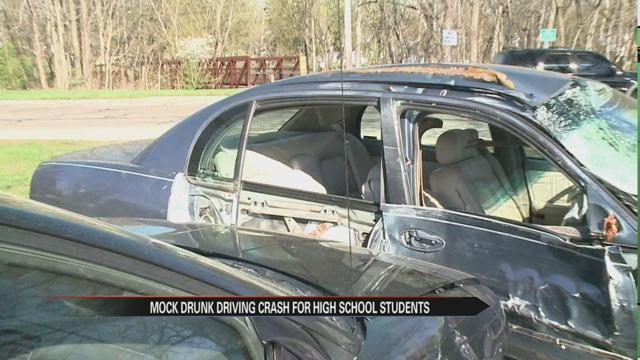 With prom right around the corner, Plymouth High School wants to make sure their students stay safe.

One way they are doing this is with a mock crash led by LEAD - Leaders Eliminating Alcohol and Drugs.

Gene Skirvin, LEAD sponsor, said "Well obviously we know in the news every day is somebody getting drunk driving people are killed and injured and this is our way if we can save one life then it's worth all the time we take to put this together."

So what exactly is it that they do? Well, on Thursday morning they had different league members like Senior Reis Yoder dress up like crash victims. They  reenacted the scene of a drunk driving accident.

Yolder said, "So just as awareness with prom coming up a big thing that we want to try make people aware of is just the dangers of drinking and driving and just drinking in general just to try to give them a vivid image of what an accident on that kind of night might look like if this incident were to occur."

They didn't hold back with how realistic or graphic the accident was because they wanted to make sure students felt the full gravity of how dangerous it can be to get behind the wheel with any amount of alcohol in the system.

The school brought out all 1800 or so students who had no idea the mock crash was about to take place.

"The first reaction will probably just be a little bit of shock kind of little bit of awe. But I don't know I think for some people it might sink in a realization that this could be real the stuff happens in real life it's not just a show it's not just to put on camera that it happens every day."

Just like in real crashes, police, fire and ambulances all showed up to respond and hundreds of kids looked on as they cut their classmates out of a smashed car.

The student actors were unconscious and bloody.

Then the coroner showed up and covered one of their classmates with a sheet - and pronounced the student "dead" at the scene.