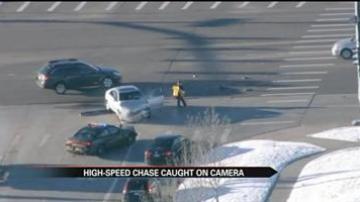 The driver carjacked a woman who had a four-year-old in the vehicle with her.

During the chase, the suspect struck a police car and injured the trooper.

Police helicopter video shows the driver swerving through traffic, nearly clipping multiple cars before crashing and running away on foot.

That four-year-old was not injured in the pursuit and has since been reunited with his parents.

Police did catch up with the suspect and right now he is in police custody.