High-speed chase ends with SUV in a Goshen taco shop 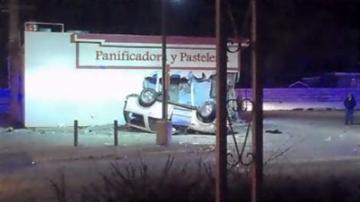 GOSHEN, Ind. -- A high-speed chase on U.S. 33 came to a screeching halt just after 5:00 a.m. Sunday when the suspects lost control of their car and slammed into a restaurant.

Down the road some, the suspect lost control of his SUV and flipped the car; snapping a utility pole in two, and ultimately landing inside the Taqueria San Jose owned by Jose Garcia of Goshen.

But the chase did not stop there, Villegas and one of the passengers fled the scene on foot.

The driver and two passengers were taken to IU Health Goshen to be treated for injuries. Villegas was then put in jail, charged with: Criminal recklessness with a motor vehicle, leaving the scene of a personal injury accident, and resisting law enforcement.