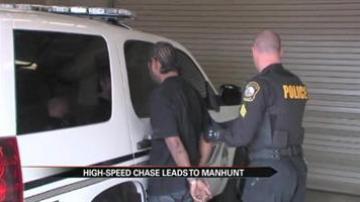 CLINTON COUNTY, Ind. -- An Indianapolis man is in jail after a wild chase that took police through a couple counties.

Kenneth Snowder was pulled over around 5 a.m. Monday for speeding and swerving all over the place.

After talking with him briefly officers say he sped off and a 20 mile chase was underway.

He was driving more than 100 miles an hour before he drove over some fences and crashed his car in a cornfield.

He then ran away from officers and it took them over three hours to find him.

"He had been drinking throughout the day. He came to the point of - 'I don't want to go to jail.' He did know about the warrant he had out of La Porte. He wasn't afraid of that. He knew they were going to come pick him up. He just didn't feel like going to jail for drinking and driving. He decided it wasn't going to be his day. Unfortunately, it was his day," said Whitestown police Sergeant David Bowles.

Snowder was taken into custody and remains in jail.

He is facing charges for reckless driving and fleeing from police.