Higher temperatures likely to cause flooding 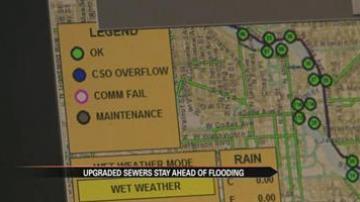 SOUTH BEND, Ind. -- Temperatures this week are on the rise, which means all the snow on the ground could lead to flooding. In the past, all that water would go into the St. Joseph River, but the city now has a way to prevent flooding.

South Bend has had more snow than normal this winter, almost two feet more than a typical winter.

All that snow has to go somewhere when the temperatures rise.

"Any time we have significant snow melt or rain, we're going to have problems with our sewer, because it's a combined sewer system," said Eric Horvath, Director of Public Works.

The city is trying to combat that problem.

Recent upgrades to the city's sewer system will allow crews to monitor water levels and in some cases, prevent flooding, before it occurs.

Every five minutes one of the sensors sends data to a computer at the wastewater treatment plant.

From there, crews can monitor how a particular area is doing and make changes all with the click of a mouse.

"We've got 127 sensors in our system. It's the most sensored system in the world. We've got a real good feel of our sewers and what level they're at," said Horvath.

Horvath admits overflows are still a concern for parts of the city.

The new system won't stop flooding completely, but it will give crews more options for how to deal with it.

"We'll continue to look at opportunities to install sensors, because the sensors themselves aren't very expensive. It's much cheaper than building major infrastructure," said Horvath.

The EPA is making hundreds of cities nationwide comply with new standards in order to prevent sewage from discharging into local waterways.