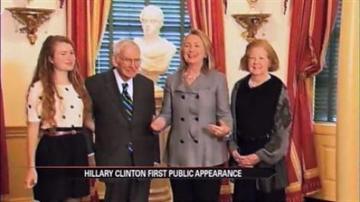 Secretary of State Hillary Clinton made her first public appearance since she returned to work earlier this week.

"I'm thrilled to be back, and I am also incredibly grateful to this fabulous team that I have here at the state department who never missed a beat while I was away," said Clinton.

Clinton say she is getting ready to hand her office over to Senator John Kerry. She says leaving office will be bittersweet.

Clinton had been in the hospital for treatment from a blood clot near her brain. She says once Kerry takes over, she will take a break for at least "a little while."