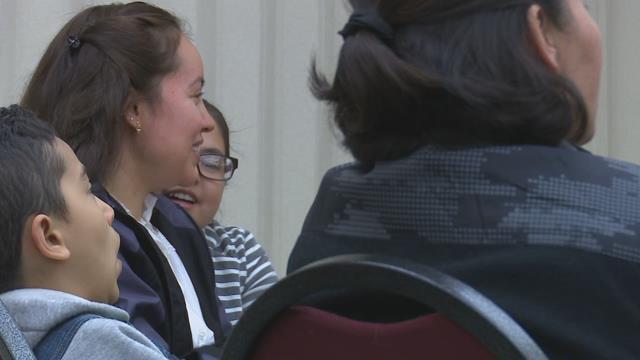 Latinos who have taken on leadership roles in their community say their stories are becoming more of the norm.

Today two men are working to change those numbers.

On a Saturday morning, parents dragged their kids to an event to talk about education.

Perez organizes community events to discuss education with local Latino parents, and he has seen a return on his efforts.

“So there are changes when you used to have a lot of Latinos not in higher positions there really are more in those positions now,” says Perez.

In the past seven years, 125 students have graduated from Goshen College.

They studied a variety of majors from nursing to education and social work.

This gives local parents hope that their kids too can succeed.

“With my other daughters I didn’t get that involved most because of the language. But I’ve studied some English so that I can be more involved in this daughter’s education,” says Angela Espinoza, who daughter attends Goshen Schools.

But is parental support the only encouragement needed?

“I as a young kid I didn’t think that I would be able to fill the shoes of this role,” says Mario Mora a Detective with the Goshen Police Department.

Mora was born in Reynosa, Mexico and moved to Elkhart County when he was a toddler.

Mora says his mother was always supportive but there were still a few barriers he faced.

“I became a citizen in 2000 and was appointed to my position as a patrol man,” says Mora.

Mora says back then he was working as a cook to help his mom, and he only knew one Latino in law enforcement.

That relationship set his career path.

“My friend David Pena let me a ride along and I though this is for me i really want to help people,” says Mora.

Within 15 years Mora has gone from patrolman to detective. He spends his free time working in the community to encourage Latino students to pursue a career in law enforcement.

Some of the families who attend the education event have been Elkhart County for three decades.

Perez says in a culture where staying close to your family is the norm, spreading the message of career options sets the foundation for Elkhart County’s future leaders.

“Since it’s a close knit family group they tend to stay and so I think we will have more Latinos staying in this community over the years,” says Perez.

Perez says about 60% of the Latinos who have graduated from Goshen College over the past decade stay in Elkhart County.