Hispanics at Home: Diversity with in Latino Community 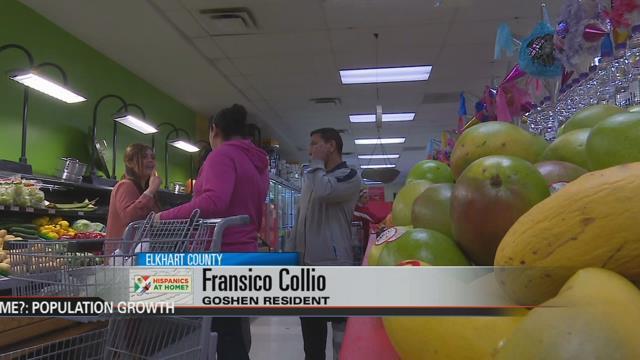 In Elkhart County, it has been two and half decades since there was a major boom in the Latino population.

After decades in Elkhart County ABC57 is asking the Latino Community if Hispanic’s feel at home?

Media cover does not always show Latinos in a positive light and these negative images are affecting an eight year old in Elkhart.

Frankie talks about the possibility of deportation. See while he was born in the United States his dad is Guatemalan.

According to Census data the Latino population in Elkhart County has grown by 71% from 2000 to 2010.

There are 33 countries in Latin American and the Caribbean. Diving into the number of those born south of the border becomes even more complex.

"I’m from Chile, and they say, where is Chile?" says Francisco Collio, of Goshen.

In 2006 Pastor Collio says he followed his wife thousands of mile away from home to start a Baptist church in Elkhart. He says it was a culture shock.

“Many people think everyone who immigrated here is from Mexico,” says Collio.

At 64%, Mexicans do indeed make up a significant portion of the immigrant population in Elkhart County.

Theirs is not the only country represented.

This is shown by numerical data along with diverse food options popping up at Mexican super markets.

“For me it’s really special to be able to share my culture by making pupusas,” says Candelaria Navarette, of Elkhart.

Candelaria works in a local restaurant after moving from El Salvador 10 years ago. She says making Salvadoran food in Elkhart makes her feel more at home.

“I like this little town, it’s quiet and peaceful,” says Candelaria.

Second grader Frankie says he likes Elkhart too, although sometime his culture does make him feel a little out of place.

“Do people look at you when you and your family are speaking Spanish?” asks ABC57.

“Yea a lot of people look at us,” says Frankie.