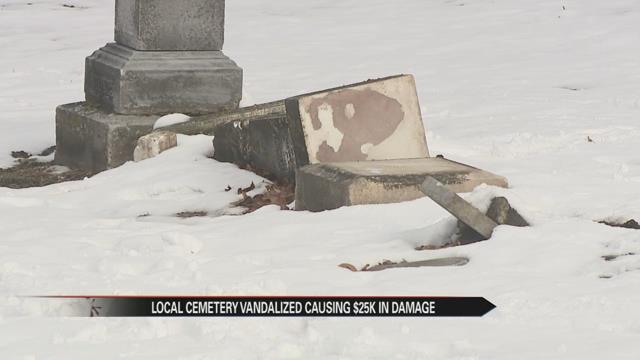 As of now there will not be justice for the dead at a Berrien Township cemetery. Approximately $25,000 worth of tomb stones were vandalized, moved, or broken at the Franklin Cemetery and police have no leads.

According to several ghost hunters online, the cemetery is haunted by a 2-year-old who was killed by a pastor.

People who live in the community feel that the blog posts about paranormal activity at the cemetery bring people looking for ghosts or trouble to the location.

Don Herman said, “Seems like Halloween there’s always somebody vandalizing it or breaking into the cemetery or old church.”

Herman has lived in Berrien Township for 28 years. He hopes the criminals are caught.

Herman said, "You don’t want them to go to prison but they should be punished.”

The Franklin Cemetery is believed to be the most haunted one in the Midwest according to people in town.

Mary Jane Dean is the clerk and supervisor of cemeteries in Berrien Township. She is still in shock after finding this historic landmark disheveled on November 2nd.

Dean said, “It’s gone. Somebody’s picked it up. Maybe the family came out... because it was right here all in pieces.”

Dean said the church has been at the Brush Lake Road location since 1854. She believes the graveyard was started in 1832.

Dean said, “This little girl, her stone was taken off. The base was knocked over and there was a rod going up inside of it. And they had picked it up and taken it way over to the middle of the cemetery.”

Dean said a head stone for a 2-year-old was moved away from her parents.

Dean said, “That’s been knocked off its base. That doesn’t even belong there! I’ll have to figure out where it goes.”

Now she is left to pick up tombstones twice her size, and find out where they were before vandals destroyed or moved them.

Dean said, ‘We’ve had vandalism before but  they’ve never done it like this! I mean they had to be strong people!”

Police said about 20 stones were damaged and Crime Stoppers is offering $1,000 reward for tips that lead police to the vandal(s).