Historic home to be demolished in Dowagiac 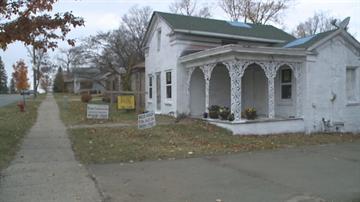 DOWAGIAC, Mich. -- A historic building on Front Street in Dowagiac is set for demolition in the next 30 days. The 150-year-old house is the oldest brick structure in the city but a fire ripped through it in January and the city wants to tear it down. The owner of the house says he has plans to fix it but is running out of time.

The single-family home at 208 Front Street is not protected under the Historic Building Registry and now the City of Dowagaic considers it a public nuisance. City officials said the owner had plenty of time to fix it up but the owner says it’s not long enough.
“You know the old thing about you can’t fight city hall? I’m finding that to be all too true,” said Gary Weaver. Weaver owns the home and said it has plenty of history. It’s one of the oldest structures in the city and used to be somewhat of a landmark.
The home had some local fame for a portrait of Mona Lisa painted on the front door. That all changed when a fire in January gutted the inside of the house. “All I could see was the smoke coming up and the snap crackle of a fire getting (started),” said Weaver.
Since January Weaver has been inundated with paperwork from the city. In May the Dowagiac City Council deemed the house a blight on the neighborhood and last week, Weaver got demolition paperwork. “Certainly we have an obligation from a city standpoint to the neighborhood to make sure a blight condition does not remain for a long period of time," said City Manager Kevin Anderson.
Anderson said the council gave Weaver long enough to fix it. The council granted twice the amount of time they usually would for a home destroyed by fire because Weaver asked. Anderson said there is no exception for a historic home. “There really isn’t," he said. "There’s a procedure that needs to be followed to make sure blight is removed so that neighborhood property is protected.”
Weaver says the reason he hasn't fixed the home is because he and his lawyer have been fighting with the insurance company for money from the fire. “And I still haven’t gotten the money,” he said. “We’re talking only three months and it could be done,” said Weaver.