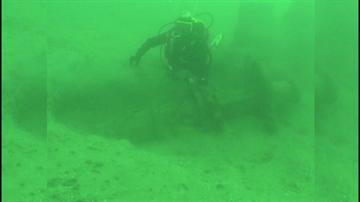 LINCOLN TOWNSHIP, Mich. - A shipwreck has been discovered by divers about five miles off shore between Saint Joseph and New Buffalo. Sunday, the group that found the shipwreck revealed the discovery at the Michigan Maritime Museum in South Haven.

The boat is an 80-foot schooner thought to be built in the early 1800s. It is buried to the deck in sand about 70 feet below the surface of the lake.

The wreck was first found on Oct. 9, 2010 by three amateur divers. They first saw the anchor of the ship dated to around 1890. Around the anchor there is evidence that much of the ship is still intact.

“I think every diver dreams of finding and diving a virgin wreck. Something no one has ever seen or been on before. It was amazing,” said Jim Scholz, one of the divers who found the shipwreck.

Scholz and a man named Don McAlhany had been looking in the area. They knew something was down there.

McAlhany is an experienced diver in Lake Michigan. He kept a log book of everything he found. “A log book entry from the early 1980s when he had gone on a wreck in this general area and forgotten about it. It must not have been much and he forgot about it,” said Scholz. “How could I forget something this good,” said McAlhany.

Since the initial discovery, a team of divers have gone down numerous times. They have found enough evidence to put together a sketch, but they need more information. “We can’t figure out what wreck it is,” said Scholz.

They believe it sank sometime around the 1890s but since so much of the boat is still under sand they can’t identify exactly which ship this was or who was on it. “We’re just going to have keep looking at this mystery wreck until we can open up more pieces of it, until we can find a clue that will let us identify what ship it was,” said Scholz. “You can then start looking through the archives to what kind of ship got lost and when,” said McAlhany.

Dozens of historic ships are recorded as lost near the St. Joseph Harbor and still have not been found. They are working to determine which one this is.

“Finding that is part of the history of individuals who live in this area,” said McAlhany. “Being able to say ‘hey we found your great grandfather’s wreck’,” said Scholz.

They hope to solve one of Lake Michigan’s many mysteries.