History behind the Confederate Flag 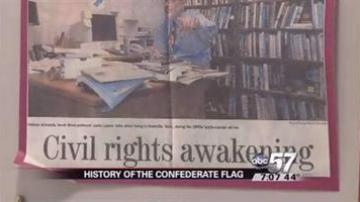 SOUTH BEND, Ind. -- ABC 57 had the opportunity to speak with Monica Tetzlaff, a history professor at IUSB and Leonard Grummell, a Camp Commander for Sons of Confederate Veterans.

They were both able to give us some history on the symbolism behind the Confederate Flag and what it means today.

Grummell is retired from the military and currently owns his own ammo shop in South Bend.

Grummell is an active member of the Sons of Confederate Veterans and is passionate about telling the truth about the Civil War.

As Grummell taught us today, those rights are similar to some of the current political issues.

"Most people who have never studied this have never heard of the Morrill Tariff. A tariff imposed by the North on only the Southern states of nearly 47 percent."

Grummell compares this unjust taxation to the excessive taxation of today's government.

He claims true roots of the Confederate Flag are founded in Southern independence and their right to protest the North's imposing laws.

Tetzlaff has a different view.

Tetzlaff cited the secession documents from South Carolina- the first state to secede from the Union.

In the documents South Carolina refers to themselves as a "slave-holding state" and the Northern states are "non-slave holding states."

"When you do start to look at the documents, not the propaganda, you see that slavery was pretty important to those founders of the Confederacy," said Tetzlaff.

She also pointed out the resurgence of the flag during the Civil Rights Movement in the 20th Century.

Tetzlaff told us how the flag was used as a symbol for the separatists and the opposition to the Civil Rights Movement during the Brown vs. Board of Education case.

"In footage from the Civil Rights Movement you can see the opponents of the movement spitting on the activists and actually attacking them and holding up the Confederate Flag."

Tetzlaff claims that although the flag may have originated as a symbol of states' rights and southern culture, it has become a symbol of racism.

Grummell argues that it has not become attached to race and instead symbolizes the honor of Confederate soldiers and Southern pride.