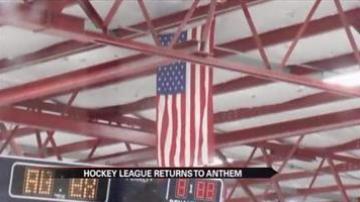 WESTMORELAND COUNTY, Pa. -- A hockey league in Pennsylvania banned the national anthem after an official said it cut into game time.

To make room for the national anthem, the league's commission said games had to be cut short.

But after eliminating the anthem to save on ice rental time, the organizer received 4,000 emails and hundreds of phone calls from all around the country.

The commissioner reversed his decision and restored the anthem.