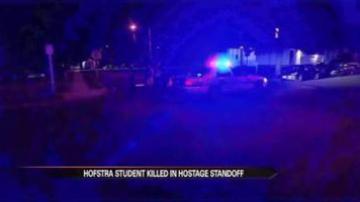 HEMPSTEAD, N.Y. — A New York college student was killed in a shoot out between police and a home invader early Friday morning at an off campus house.

Investigators say police were respondsing to a home invasion at the student's house when an officer shot and killed 21-year-old Andrea Rebello.

The Hofstra University student shared the house with her sister and two others.

Police went there after a 9-1-1 call from someone claiming a gunman had ordered them out of the house to get cash from an ATM.

When police arrived, they say the suspect was holding a gun to Rebello's head.

Investigators say an officer fired eight rounds. Seven hit the suspect and one of those rounds hit Rebello.

A police spokesperson says the officer who shot Rebello feared for his life when the suspect turned on him.

Authorities have not released the identity of the officer.