'Hole in the City' ownership up in the air 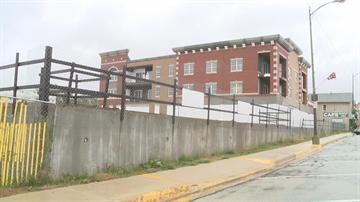 NEW BUFFALO, Mich. - Some call it the 'Hole in the City'. A massive construction project in New Buffalo has gone untouched for years. The project’s official name is 'Fountain Square' and at one time was advertised as the new cornerstone of the city. Now it’s the biggest eyesore.

This project has a similar story to many other construction projects after the recession. The lender, LML Fountain Square, went into default and the borrower, MB Financial Bank, foreclosed. The ownership of the building is being decided in Berrien County Trial Court. A receiver was named in July.

People around the city just want to see something happen with the space. “At least one out of ten people ask 'What’s going on next door, or what is it, or why does it look like that.'” says Jill Leuthardt, manager of Michigan Thyme, a gift store in Downtown New Buffalo.

Leuthardt tries to forget about it but it's difficult. The project is next door. “We put some lace here to disguise the lovely scene,” she says sarcastically. There’s almost no getting around it.

Not a brick has moved at Fountain Square in two years. Leuthardt doesn’t know what to say to customers. “Unfortunately none of us know, it’s tough to give them an answer,” she says.

It’s not gone unnoticed by the City of New Buffalo. “The number one thing people said is look at that. We hate that," says City Manager Michael Mitchell. He recalls asking businesses about the things they like and dislike about the city.

The city was in favor of the project in 2005. It was planned as a 40-thousand square-foot retail complex with 70 condos on the upper level. Fountain Square was supposed to add aesthetics to the city but according to Mitchell, the opposite happened. “When you have something like that its visual unattractiveness detracts from the downtown as a whole,” he says.

The city of New Buffalo says there is interest in finishing the development of the property, but an owner would need to be determined in court. According to the court-appointed receiver of the property, it could be more than a year before an owner is determined