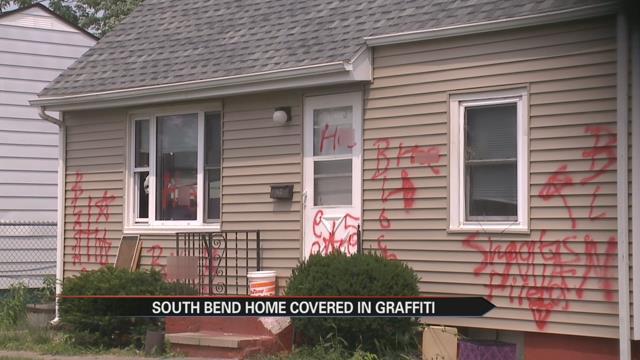 Neighbors in a South Bend community are disgusted after waking up to offensive language and possible gang signs covering a home in bright red paint. The home off Western Avenue on Sheridan Street in South Bend is a rental house.

The property owner and police were on the scene Monday afternoon to file a report.

The homeowner says the next step is to clean up the mess.

Neighbors are surprised because they say this has never happened on their block.

Both men live near the home and woke up early Monday morning to the sight of a home decorated with not only foul language but also signs of criminal groups.

“Some of the symbols look like they are gang related,” says Rodriguez.

Rodriguez says he does not typically worry about safety in his neighborhood.

“This is the first time I’ve ever seen vandalism occur in this area,” says Rodriguez.

He grew up in the neighborhood and is now raising his own family on Sheridan Street in South Bend.

“A little uneasy makes me wondering if my kids come across any of that,” says Rodriguez.

Community leaders like Henry Davis Junior, Second District Councilman of South Bend, thinks sights like these are popping up in unusual places.

“This is very disparaging. This is the first time I’ve ever seen a residential property being tagged,” says Davis.

Davis is concerned that community building efforts and neighborhood rehabilitation have been placed on the back burner.

“There are a multitude of issues we need to tackle but we definitely need to have more investment in our neighborhoods,” says Davis.

This is an investment that neighbors like Don McKinney would like to see more of. He also hopes to see more regulations on landlords and tenants to help prevent this from becoming the norm on his block.

“We need to get everything cleaned up get the right tenant in there and get back to a normal neighborhood,” says McKinney.

The landlord said there is no one living in this home anymore and the locks were changed Monday afternoon.

South Bend Police say there are efforts being made to track the graffiti to narrow down where it is happening and who is doing it.