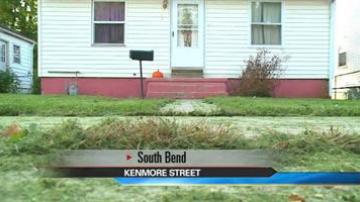 Police believe a home invasion on South Kenmore Street started out as a burglary.

Police say the suspect entered through a window and things escalated things quickly.

“At some point a struggle ensued and the home wners were hit with a shovel, which is kind of different as a weapon,” said Captain Phil Trent, public information officer, South Bend Police Department.

And to make things even more bizarre, the victims are the parents of the suspect's girlfriend.

“It’s a relationship with one of the family members and that’s who our suspect is who has incidentally been arrested,” said Trent.

One neighbor says the family hasn’t lived there long, but he’s seen the male suspect around before.

“It’s a high turn-over rental property,” said Paul Ford, neighbor. “It usually sees a tenant--the longest stay I’ve ever seen is probably three months. It’s just one of the problem houses we have here in the city.”

After the attack, Brevard fled the home with the homeowners’ daughter. The silver minivan in the driveway served as his getaway vehicle, but he didn’t make it very far.

“It eventually ran out of gas near Auten and 933 where he was forced to abandon the vehicle,” said Trent.

Ironically he ran out of gas at Rick’s gas station.

Brevard is in the St. Joseph County Jail.