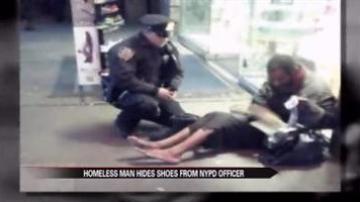 NEW YORK CITY. -- A week after a New York City Police officer bought shoes for a barefoot, homeless man on the street, some are wondering where those shoes are now.

A New York Times reporter tracked down 54-year-old Jeffrey Hillman on the upper West Side and he was shoeless again.

He told reporters he had to hide them because they were worth too much money, but some question if he took advantage of the officer's act of kindness.