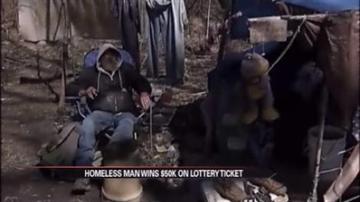 BLOOMINGTON, Ill. -- He has spent his days on the streets but now an Illinois man has a chance to finally go home with $50,000.

The 59-year-old-man known as Dennis or "Double D" won the money off of a scratch ticket.

Double D has been homeless for more than 30 years and spends most of his days searching for money and food.

Now, his worries are gone thanks to a lotto ticket but he is ready to spread the wealth.

"I'm paying it forward. All the guys camped out back there, I'm gonna give them each $100," said Double D.

Double D should get his check in about four to six weeks since he does not have an address. He is having his check sent to a friend's house.