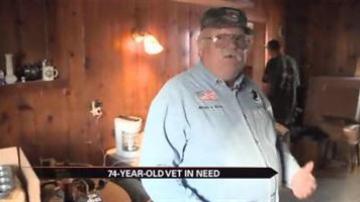 If he's lucky, he can get a volunteer to help him out with yardwork every once in awhile.

But it's never enough for him to move back in.

After several complaints from neighbors to Code Enforcement, his house was deemed unliveable, and he was forced to move to the homeless shelter.

The Vietnam Veteran never thought it'd come to this, but he's quick to tell you, life doesn't always go the way you plan it.

"The doctor said it's really unusual to go from Stage 4 to remission in a year," said O'Grady.

After a two-year battle with bladder and kidney cancer that kept him from maintaining his house, O'Grady is ready to move back in.

"People, they don't really want to get involved with their neighbor," O'Grady said.

Neighbors though, said it's not their responsibility.

"I don't know what his financial situation is, that's not for me to say," said Anthony Marshall. "But at the same time, it just doesn't seem like he's worked hard enough to try to fix his house.

Marshall has lived across the street from O'Grady since he was a boy. He said houses like his neighbor's don't get the way they are overnight.

"We have been watching the same things happen for years," said Marshall. "At least, 15-20 years that I can think of. Honestly, the houses just need to go."

Leaving O'Grady to work his house a little at a time.