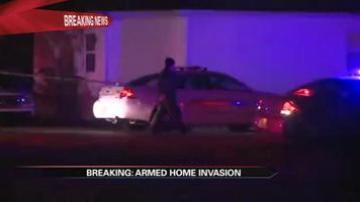 SAINT JOSEPH COUNTY, Ind. -- Police got a call just before 8:30 p.m. Tuesday night from a homeowner on the corner of Fillmore Road and Peppermint Road saying he had been shot.

The 57-year-old homeowner was transported to Memorial Hospital where he had surgery to remove the bullet.

Police say two white male intruders about 5 ft 6 inches tall wearing grey hooded sweatshirts forced their way into the home and into the man's bedroom where he was sleeping.

The homeowner reached for his own pistol, but before he could grab it, one of the intruders shot him in the stomach.

They were on the scene measuring tire tracks and had the K-9 unit searching for the two suspects.  However it appears they have gotten away.