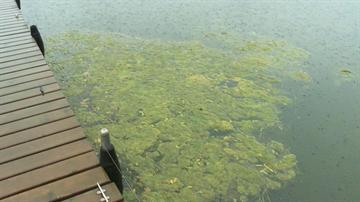 ELKHART, Ind. – Hundreds of homeowners who live along the St. Joseph River gathered at Pinewood Elementary on Thursday night to discuss what to do about the weeds that have been choking the river for the past few months.

The problem has been growing ever since zebra mussels made their way into the river.  The mussels clean the water and as the water becomes clearer more sunlight hits the weeds which grow larger and faster each year.  The weather this year has brought the situation to a head.

“We’ve had a perfect storm with the weeds, we got a very mild winter and the river never froze over,” explained Tom Shoff, President of The St. Joseph River Association.  “When it rains in the spring sediment goes down in the water and makes the water cloudy, the water was clear in the spring and then we have a hot humid summer and the weeds flourished.”

The weeds make the river difficult to navigate in boats and pose a safety hazard for water sports.  Many are worried they will drive down the property values for homes near the river.

Tom Shoff is pushing for hiring an aquatic weed removal company to spray herbicide chemicals to kill off the weeds.  The problem is one herbicide won’t kill all 12 species of weeds found in the river and the process will be expensive and will have to be done annually.  Shoff and the weed removal company estimate the cost will be around $50,000 a year that will have to be paid for by the St. Joseph River Association through collections from homeowners.

There was plenty of debate at Thursday night’s meeting of homeowners, many of whom tried to offer other options that they believed would be less expensive.  Dredging the river, draining it or introducing animals into the river that might eat the weeds were all ideas that were brought forward.

“The one that seemed to resonate more than anything was to cut the weeds,” Shoff described.  “That was tried two or three years and as the DNR fellow said cutting the weed basically multiplies the problem.”

An expert with the Department of Natural Resources said simply trimming the weeds isn’t a long-term solution since any shreds of the weeds left in the water afterward can grow into a new plant.

The weed removal experts and Tom Shoff believe using herbicides is the best option.  But, still need to raise the money to pay for it and the state will only assist in paying for the removal of the one non-native species of weed found in the river.

When The St. Joseph River Association agrees upon a weed removal plan they will have to send it to the state for approval, which they hope to do as soon as next October.