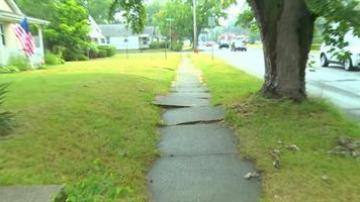 SOUTH BEND, Ind. -- Residents who signed up for South Bend's curbs and sidewalk program are frustrated because they paid to get new sidewalks, but 18 months later they still have uneven and broken sidewalks.

Bob and Margie Connell signed up for the program 18 months ago. The sidewalks and curbs on Logan Street are an uneven, broken mess.

"There was a lady walking down the street one evening and she was walking her dog and I was looking out the door and I watch her take a nose dive to the sidewalk," said Bob Connell.

The sidewalks and curbs are an uneven mess.

That's why Bob jumped at the chance to get a new sidewalk.

"They had it advertised in the paper. They had a sidewalk program. You just had to call and make an appointment," said Bob.

Bob and his wife Margie paid $800 and got on the list.

It has been sixteen months since they signed up and nothing has been done. The sidewalks are still an uneven mess.

"We're waiting until we hear something from them and they're not returning calls so we don't know anything," said Margie Simbeck-Connell.

We contacted the city and were told there is a huge backlog. So many people signed up for the curbs and sidewalks program the city can't keep up with demand.

"They had promised us to do the sidewalks and we feel they should go ahead and do them," said Margie.

The city says sidewalks are the homeowners' property. If someone has an accident on the sidewalk, the homeowner is responsible.

The city says it is no longer accepting residents to the curb and sidewalk program.

Because it is a program that depends on the weather, the city says delays are to be expected.