Homeowners in Bremen plead for help with flooding 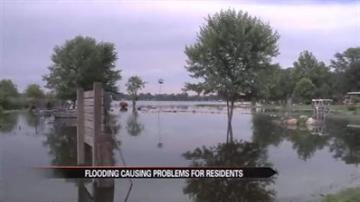 BREMEN, Ind. -- Many homeowners in Bremen are fighting against the rising waters of Lake of the Woods.  During this last storm, in many spots along the lake, water swallowed up piers, yards and crept up to people’s homes.

The key to stopping the flooding lies in the dam. But homeowners say they cannot get anyone from the DNR to open it.

"Every time it floods and we call there's no response, its like chasing a ghost, somebody should help us!" said Annette Fox, whose father owns a flooded lot on the lake.

This is the second time in two weeks that the lake levels have caused excessive flooding.

"The water was over the seawalls on the damn and the DNR is still saying the water level is not high enough," saidFox.

ABC57 called the DNR to find out how they determine when water levels are too high. They said they have received pictures of the flooding but the water levels in the lake still are not high enough for them to open the dam.

They also said that is a decision that has to be made by the DNR and the operator of the dam.

But homeowners are fed up. They say they are tired of the runaround.

"How bad does it have to get? We need somebody out here to look at this," said Fox. "I just wish something could get done."