Homeowners see improvements after ethanol plant pump turns back on 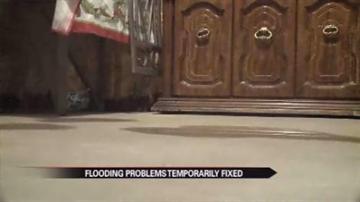 SOUTH BEND, Ind. -- It has been three days since the city decided to turn on the water pump at the former New Energy ethanol plant to stop the flooding in the nearby neighborhood.

Monday, homeowners said that one pump is making a massive difference.

Just three days ago when Graciela Gomez showed ABC 57 her basement, she had to walk through several inches of standing water, but now it is finally dry.

"Today when I came back from work and checked I said to myself, 'Wow.' It's good and I feel better," said Gomez.

"It really has been a good day. We can see that we may potentially have rain coming in and our weather here. So, it is nice to know that the pumps are on right now," said Davis.

Although the flooding is over for now, the mold is still everywhere. Gomez says she is eager to fix the water damage in her basement, but knows the pumps are only a temporary fix.

"I am going to wait a little bit because I don't want anymore surprises, like to fix it and the water come back again," said Gomez.

The city says that the pump will remain on until the fate of the former New Energy ethanol plan is determined since shutting down in November.

Right now that one pump is removing four million gallons of water each day and already the city says the ground water table has dropped 1.25 feet.

"My hope is that this is a good beginning to a solid end because as people see their water tables drop we need to now focus on a permanent solution," said Davis.

New owners are in the process of purchasing the ethanol plant and city officials say they plan to sell it to someone who will keep the facility and the pumps running full time.

However, that is still not a guarantee for Gomez that her basement will remain dry.

"When they say they are going to do this and this is going to happen, that is when I will feel better. Right now I am happy, but not 100 percent [happy]," said Gomez.

City officials say that water is being pumped to a storm sewer. From there it goes to a cooling pond and then out to the Kankakee River.

The city says Monday's rain and current water levels are not a concern right now, but they will continue to monitor the water levels in the area to make the river can continue to handle the excess water.