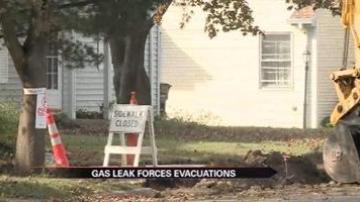 SOUTH BEND, Ind. –Ten houses on Belmont Avenue in South Bend were evacuated Wednesday after workers hit a gas line running under the sidewalk in front of one of the homes.

"The initial arrival crew found a two inch size gas main in the street where an excavation crew had damaged the gas line and it began to leak. It's leaking into the neighborhood at this time,” said Mark Catanzarite, Battalion Chief South Bend Fire Department.

Construction crews are working on a curb and sidewalk project in the neighborhood.

"It hasn't bothered anyone, not at all, until now,” said resident Joy Dermody.

She said the woman whose house it happened behind ran down the street when she smelled the gas.
“She has to worry for her dogs, which is really sad. She was really concerned for her elderly neighbor but they said that they had evacuated her,” said Dermody.

Firefighters didn't allow the evacuated residents to re-enter their homes in fear of friction causing an explosion.

"Once there's gas leaking and if your house is real close to where the leak is, we don't want to get anybody close to the house. Anything can become an ignition source-static electricity can be an ignition source, let alone a furnace,” said Catanzarite.

Houses surrounding the leak were evacuated, but some nearby residents also evacuated as a precaution.

Nipsco says it has isolated the gas leak and only two homes are currently without service.