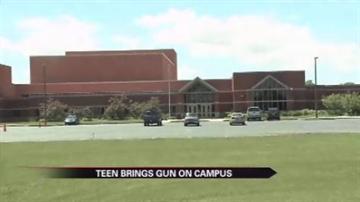 DOWAGIAC, Mich. – A 13-year-old homeschooled student shot himself in the woods just outside the middle school in Dowagiac Michigan Monday morning.

According to police, a custodian spotted 13-year-old Darren Price carrying a gun on school property. He called the principal who called police.

"You get up in the morning and send your kids to school, you shouldn't have to fear for their safety. You know, I'm a little shocked cause you read about it, you hear about it in the news nationally but for it to happen in our little home town is scary,” said Donnetta Jordan, parent of a Dowagiac Middle School student.

Early Monday morning, all Dowagiac schools were locked down after Price was spotted on the middle school property with a handgun.

"The individual walked into the woods. At that point the principal called 911 and the police arrived and set up a perimeter around Dowagiac Middle School,” said Tom Atkinson, Director of Public Safety for City of Dowagiac.

Police say Price emerged from the woods, saw a police officer and took off back into the woods.

Shortly after, police heard a single gunshot and began searching.

They found Price on one of the trails.

"They immediately started applying first aid. Pride Care ambulance was called. He was transported to a hospital here in Dowagiac where he later passed away from his injuries,” said Atkinson.

The superintendent of Dowagiac Schools says Price was not a current student at the middle school.

He and his siblings were being homeschooled this year, but attended last year.