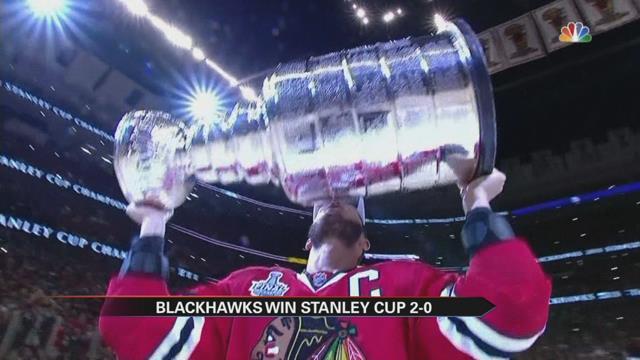 Chicago hockey fans have a lot to celebrate.

For the third time in just six seasons, the Blackhawks hoisted the Stanley Cup above the ice after beating the Tampa Bay Lightning in a 2-0 shutout.

But this championship victory was even more special because it happened on home ice for the first time since 1938.

Here in Michiana, Hawks fans also got in on the Stanley Cup playoff hype. The extended hockey season has also been good for area bars and restaurants that stay open to show the games.

"We've got a decent flow of Blackhawks fans every game," said Nathan Rubendall, Mulligan's bar night manager. " Everyone seems to have a blast every time they come in here and watch."

Monday night was no exception.

"We've been riding out this season all year being here, celebrating, having fun, and it was good to be around good friends to celebrate the cup," said Hawks fan Mike Hawryszkow.

"I've never seen a Blackhawks following like this than tonight man," said Nick Hawryszkow.  "It's been a hell of a ride."