Horse tries to board London bus 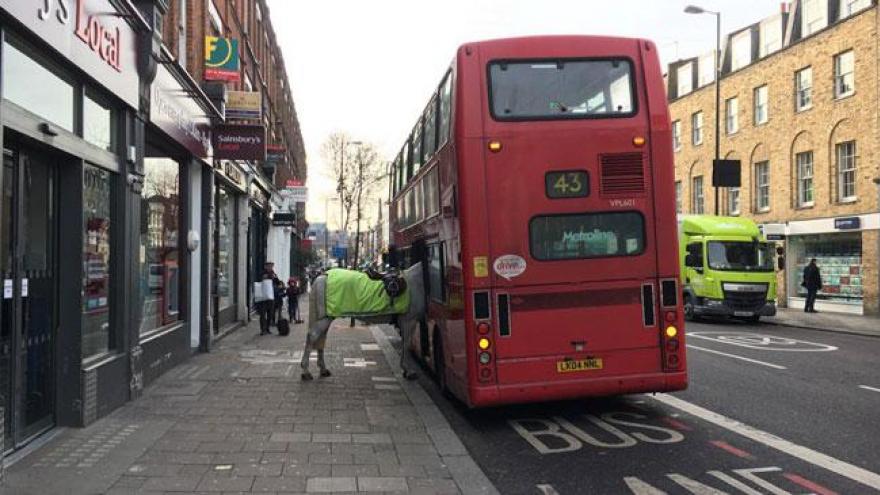 LONDON (CNN) -- London's red double-decker buses are some of the city's most iconic features. But for daily commuters, they're just a normal sight.

Unless there's a horse trying to board.

The number 43 bus traveling through North London's borough of Islington caught the attention of Jersey politician Simon Crowcroft, who was visiting friends in London on Tuesday morning.

Crowcroft snapped some now-viral photos of Invictor, a horse assigned to police constable Dan Smith of the Metropolitan Police's Mounted Branch, as it tried to board the bus.

No, Invictor wasn't trying to hitch a ride across town. The horse was following Smith, his rider, who had dismounted to help a man who had collapsed on the bus.

"I was with my wife...and we got lost. As we came around the corner, what we saw was a horse that looked like it was getting on the bus," Crowcroft told CNN.

Invictor was applauded as a "team player" in a message posted on the Metropolitan Police Task Force's Twitter account.

Crowcroft said that he was happy the pictures have been so well received as it spoke to positive work that the police do to assist the community.

"I think the photo appeals to a lot of people, particularly those who like animals. But it also says a lot about the Met Police -- that they are on hand to assist the general public... I think that is very reassuring in the world that we live in," he said.

A spokesperson for the Metropolitan Police told CNN that the man who fell ill was treated by paramedics at the scene and then taken to a hospital "as a precaution."