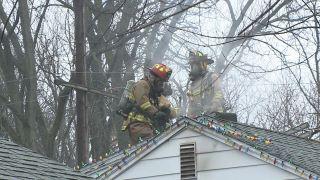 SOUTH BEND, Ind. - A house fire caused the closure of Douglas Road this afternoon from S.R. 23 to Ironwood.

Fire crews told ABC 57 News that the woman was not home at the time.

A dog inside the home died and there were at leas three cats inside, one of the cats was missing. The other two cats were found and in distress - medical crews were working on them while we were on the scene.

Douglas Road was reopened around 3:30 p.m.