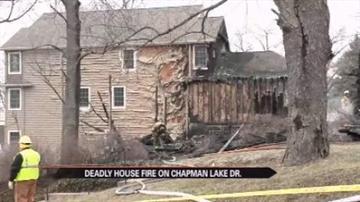 KOSCIUSKO COUNTY, Ind. — As flames towered overhead and small explosions erupted around him, Addie McClanahan rushed to make sure the family living in the home on Chapman Lake Drive was safe.

"The worst part was coming out and not being able to do nothing about it," said McClanahan.

The heat was so intense it destroyed the home and damaged another.

But it was the loss of life that was most tragic. A body found in the rubble of the home and investigators are trying to determine if it was the home owner.

"his vehicle is located here, and most of the time if the vehicle is here he would normally be at this location," said Sergeant Chad Hill of the sheriff's department.

McClanahan said that the man normally slept during the day.

Firefighters do not know yet what started the fire but they do have an idea.

"They are believing at this point in time, from what they can see evidence, it looks like potentially the source may come from the basement," said Hill.

And that it spread quickly, too quickly for everyone to escape it.

Investigators are still sifting through the rubble trying to determine the cause of the fire.

The identity of the man found in the home has not been released.