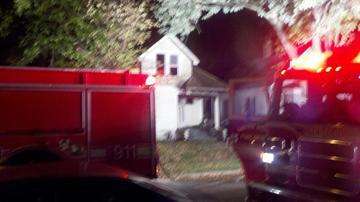 SOUTH BEND, Ind. -- Three people were sleeping in a home on the 100 block of East Donald Street. Just before midnight flames started to rip through out the home.

Two people were able to make it out but a teenage girl had to be rescued. Right now two of the residents are at Memorial Hospital.

Firefighters had to evacuate the home for a while. They were fighting the fire but a flash over happened in a room. That's when flames burst through out the room, making it unsafe for firefighters.

We have learned that one of the victims was transfered from Memorial Hospital to St. Joseph Hospital in Fort Wayne.  The victim is listed in critical condition in the burn unit.