House on Kenmore Street goes up in flames 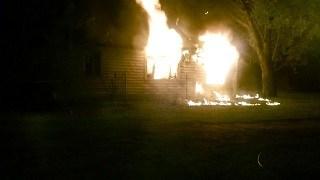 A neighbor on Kenmore St. in South Bend says she woke up to the sound of shattering glass. When she looked our her window, she saw an "electric show" next door, as flames quickly took over her neighbor's home.

"The house went up really fast," said Savannah Rapalski, who lives in the 200 block of Kenmore St. "By the time I called the first two side windows were already like flames coming out of them. The windows were breaking when I was running across the street to my other neighbors, who didn't answer the door because they were sleeping."

Four fire trucks showed up shortly after the call came in a little after 2 a.m. Wednesday morning.

It took crews less than an hour to get all the flames out.

For now, the official cause is undetermined, but Rapalski said she saw some sparks that could indicate the fire was electrical.

"The power lines at the back of the house, the fire by those was an electric show," Rapalski said. "It got really bright. Like lightning, but right there!"