How accurate are gas pumps? 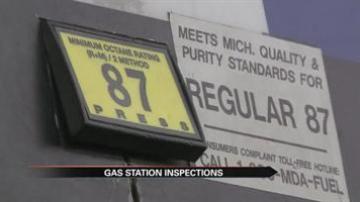 NILES, Mich. -- When you pump gasoline, do you know you're getting and paying for the right amount? We poured over inspection reports and found dozens of cases in Southwest Michigan where gas pumps were inaccurate.

Nearly all of them are up to par.

But some are out-of-sync.

Since 2010 there have been at least 87 gas pumps found to be inaccurate.

We dug through the data to find out where they are.

JD's Truck Stop in Niles is one of them. In 2010 one of their pumps was dispensing less gas than advertised.

Since then, however, 13 of their pumps measured out more than what was promised.

We wondered how a consumer would know that.

"The price should be the same no matter where you're at - not whatever they want to charge," said driver Craig Owen.

We called the state of Michigan to learn more.

A spokesperson with the Weights and Measures Division says all pumps are inspected once every 4 years.

The agency boasts a 99-percent compliance rate but is currently working to identify all problem locations that need to be re-inspected.

Michigan has more cases involving gas pumps that give too much gas away than of not enough.

One inspector says most of the problems stem from old and faulty equipment. And while they do inspections annually all pumps will eventually fail.