How hot is playground equipment on a summer day?

NOW: How hot is playground equipment on a summer day?

Sunshine and playgrounds - it's a classic summertime duo. Is it possible, however, that the sun can warm playgrounds too much? When does equipment become unsafe for kids to touch? I wanted to find this out through an experiment.

I chose two parks in close proximity to take temperature measurements. Leeper Park has a playground completely in the sunshine. Potawatomi Park's playground is in the shade.

The hottest hours of the day are the late afternoon. I ran the experiment earlier than that - right before lunch time. This is usually a pretty busy time at the playground.

At the time of my visit, air temperature was around 84 degrees.

Here are a few results from sunny Leeper Park.

Rubber turf on the ground: 158 degrees 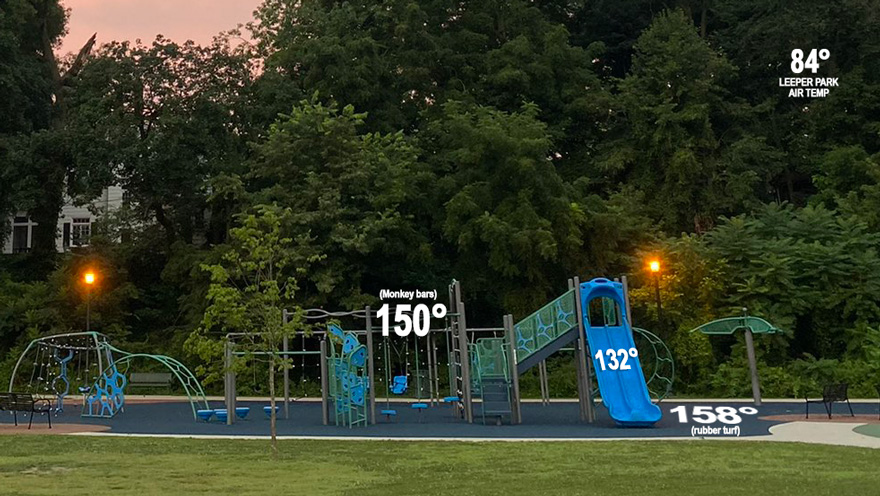 The next stop on the experiment was Potawatomi Park. My hypothesis was that this park would a safer place to play, since it was in the shade.

Here are a few results.

Rubber turf on the ground, in the shade: 86 degrees

Rubber turf on the ground, in the sun: 138 degrees

All in all, the temperatures at the shaded park were cooler, but could still be a concern. There were still several patches of sunshine on the equipment, which meant a bigger variety of temperatures here.

There's also a splash pad at Potawatomi Park. I took the thermometer to continue the investigation here.

Splash pad concrete, out of water, in shade: 90 degrees

Splash pad concrete, out of water, in sun: 104 degrees

Most of the kids I saw at the splash pad were barefoot. One wrong step out of the water could be painful without shoes.

"Some of our kids like to run around barefoot, they just love that freedom!" says Dr. Javier Galan.

Dr. Galan is a pediatrician at the South Bend Clinic. He says the high playground temperatures I found in my experiment are concerning.

"Those temperatures of 150, 160, can definitely cause thermal burns," he explained. "In all people, but especially in younger kids, who kind of just run up to them and get on the slides and playground toys."

On a 90 degree day, temperatures on playground equipment could be even higher than what I measured in this experiment. The ones who are most susceptible are often the ones who are actually touching and playing on the equipment - toddlers.

"Younger than three or four years old, their skin is just a little bit more sensitive than ours," Galan said. "It's thinner."

This doesn't just go for going barefoot at the park or splash pad. Many toddlers crawling on the ground (especially those wearing shorts), could also be at risk.

Should you just avoid the park completely to avoid thermal burns? Not necessarily, but there are a few precautions you can take.

"We really just recommend for all of our parents and caregivers to avoid being outside when it's hottest," Galan instructed. "Touch test your slides and your swings, just make sure that nothing's too hot that can cause injury, because if it's too hot for you, it's going to be hot for the kids."

Hydration and supervision can go a long way at the playground. Keeping a careful eye on your kids can prevent most serious injuries and burns, according to Dr. Galan.

Keep all of these tips in mind before you head off for your next playground adventure.