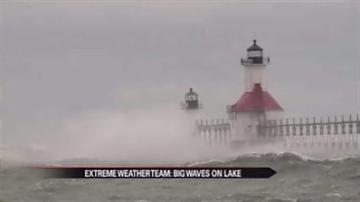 ST. JOSEPH, Mich. – The winter storm’s winds produced 20-foot waves on Lake Michigan, according to the US Coast Guard. The water is so unpredictable, the Coast Guard warned beachgoers to stay off the pier at Silver Beach.

Michiana's first winter storm has made the Lake Michigan shoreline a violent and treacherous attraction.

"The waves are incredible. We heard the weather report and came up here to see the waves and take pictures,” said Curt Loutzenhiser.

"We've actually stopped a few places up along the lakeshore doing some bird watching and by far this is the windiest location we've come across. It's pretty stiff,” said Evelyn Kirkwood.

According to the Coast Guard, the winds are in excess of 50 miles per hour and the lake is topping out at 20 foot waves, creating hazards along the pier.

"As far as going out on the pier, it's very, very dangerous. The waves will actually crash along the pier and the water can actually sweep across the pier and can wipe you into the water very easily,” said Darron Quade, U.S. Coast Guard.

Most visitors heeded the warning.

"We actually didn't get close enough. The waves can crash up there unexpected and get you,” said Loutzenhiser.