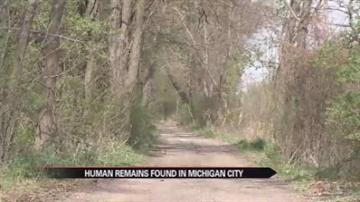 MICHIGAN CITY, Ind. -- Skeletal remains were found in the woods of the town of Pine  and now one Michigan city family is wondering if those remains could be their family member.

Twenty-nine-year-old Candi Brown disappeared last August and police still have not found her body or proof that she is alive.

Roger Glick was curious when he saw police searching in the woods across the street from his home around 6:30 Saturday morning.

“I saw some unmarked police cars down in front of that building with yellow do not cross tape,” said Glick.

It was not until later that he heard they were actually investigating human remains that were found in the woods.

“Safe, very quiet. Nothing usually happens too much,” said Glick.

He wasn’t that surprised at the discovery near his home.

“There are woods. It is quiet and very dark. Nobody is around,” said Glick.

He is hoping police identify the body soon.

“Whoever it is, I just hope they solve the problem easily find the family. Whatever family it is can have peace with it,” said Glick.

One person looking for that peace is Rick Brown.

“We are hoping it is her so we can have closure, but we hope it is not because we want her to be alive,” said Brown.

His niece, 29-year-old Candi Brown has been missing since last August.

Police have not yet contacted the Brown family, but the family is anxiously awaiting answers, so they can get justice for the mother of three.

“We have never stopped looking for her.  She is on our minds all the time,” said Brown.